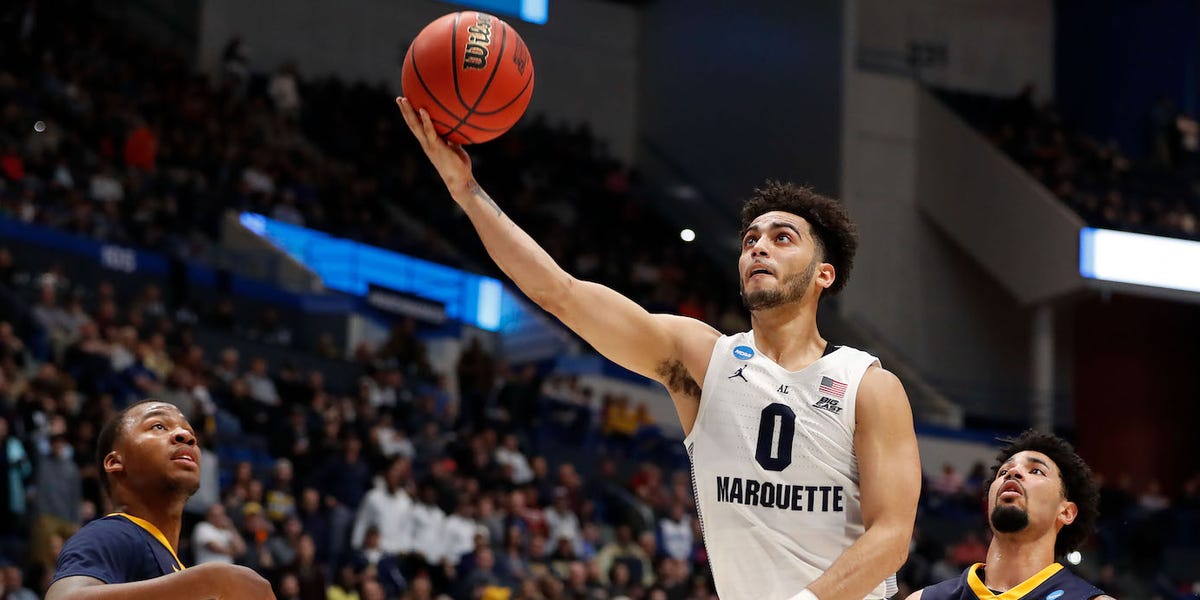 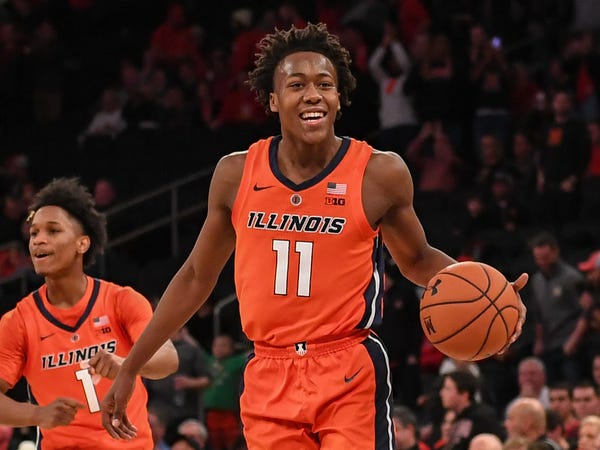 A 6-foot-5 point guard whose breakout freshman season garnered calls to flee for the NBA, Ayo Dosunmu chose instead to stick with the Illinois Fighting Illini for another season and help lead the team back to the NCAA tournament for the first time since 2013. Expect him to be the Illini’s go-to and one of the shining stars in the Big 10 this season. 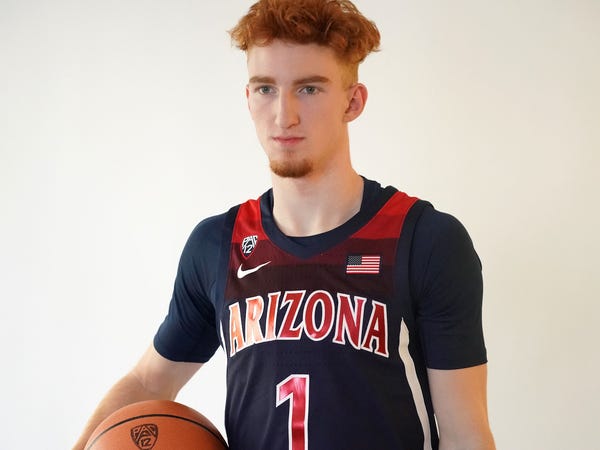 Bright red hair isn’t the only thing distinctive about Arizona freshman Nico Mannion. The top-touted recruit is a prolific scorer and expert floor general, as evidenced by 30.4 points and 6.2 assists per game during his senior season at Pinnacle High School. Mannion heads to Tuscon looking to right the ship and lead the No. 21 Wildcats back to the NCAA Tournament. 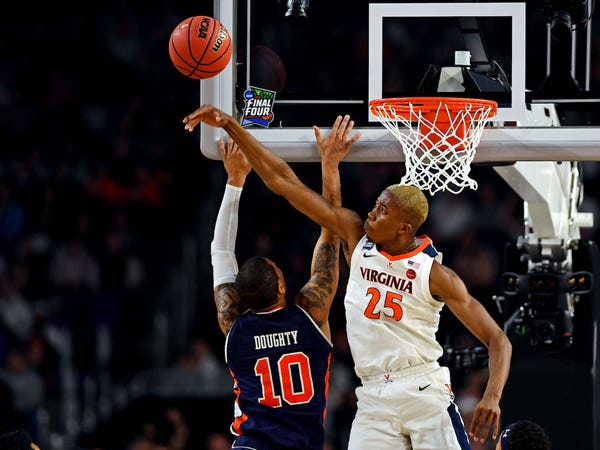 After completing the ultimate redemption story by winning the National Championship just one year removed from the worst loss in NCAA history, the Virginia Cavaliers need a new leading man. Mamadi Diakite — a 6-foot-9 forward with a penchant for protecting the rim  — may be that guy. He seemed to have his most impressive outings towards the tail end of the Cavaliers’ season, and it seems likely he’ll be ready to carry that momentum into a larger role this season. 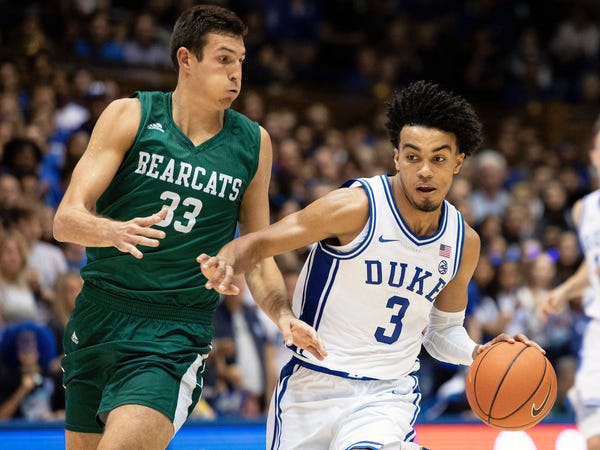 With yet another young core filling out his roster, Duke head coach Mike Krzyzewski will look to sophomore and team captain Tre Jones to lead the Blue Devils. The younger brother of Duke one-and-done point guard Tyus Jones, Tre returned to Durham despite rumblings that he would join classmates Zion Williamson, RJ Barrett, and Cam Reddish in the 2019 NBA Draft. During his freshman season, Jones ranked third in the NCAA with a 3.62 assist-to-turnover ratio and checked into the top 50 with 5.3 assists per game. He’ll need to find a more consistent shooting stroke and take on more of a scoring role this season, but Jones — who is one of the best defenders in the nation — should make a splash in the ACC and beyond this year. 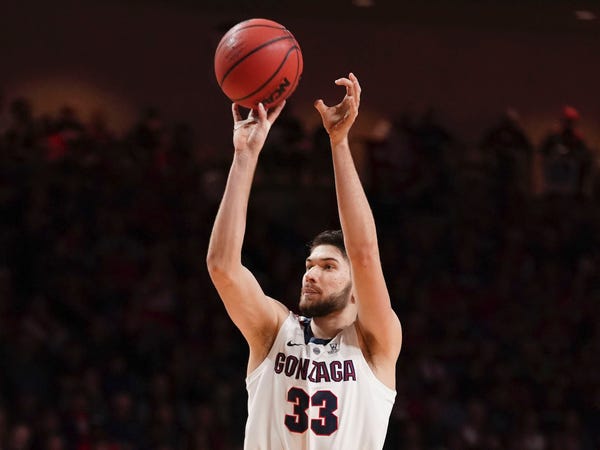 A 6.2 point, 1.5 assist, and 3.9 rebound per game stat line isn’t typically indicative of an All-America-caliber season, but Gonzaga’s Killian Tillie is likely one of the very few exceptions. The Frenchman was instrumental in leading the Bulldogs to three Sweet 16 appearances, two Elite Eights, and a national title game appearance, but missed 22 games last season thanks to ankle and foot injuries. When he returned the court, the then-junior forward struggled to find a way to comfortably settle into a rotation that relied heavily on consensus All-American Rui Hachimura. Still, his 50% shooting from the field and 43.8% shooting from 3-point range are encouraging, as is the fact that all of his numbers were considerably better when he was healthy the year prior. Look for Tillie to be the go-to guy on this year’s top-10 Gonzaga squad. 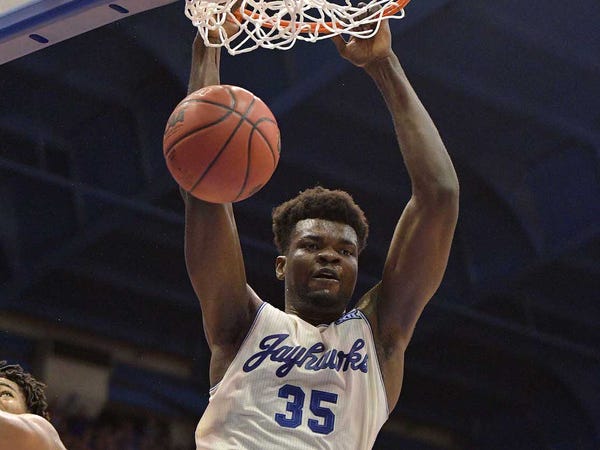 After injuries kept the Jayhawks’ big man sidelined for all but nine of Kansas’ games last season, Udoka Azubuike returns for his senior year primed to control the paint all season long. In his few outings during the 2018-19 season, Azubuike averaged 13.4 points and 6.8 rebounds per game and managed to become the Jayhawks’ third-leading blocker with 1.6 per contest. But perhaps more impressively, “Doke” led all Division I players with 77.0% shooting from the field his sophomore season, clocking in at second best for a season in NCAA history. The 7-footer joins yet another stacked roster for his senior season but should be the commanding force down low for Bill Self’s squad. 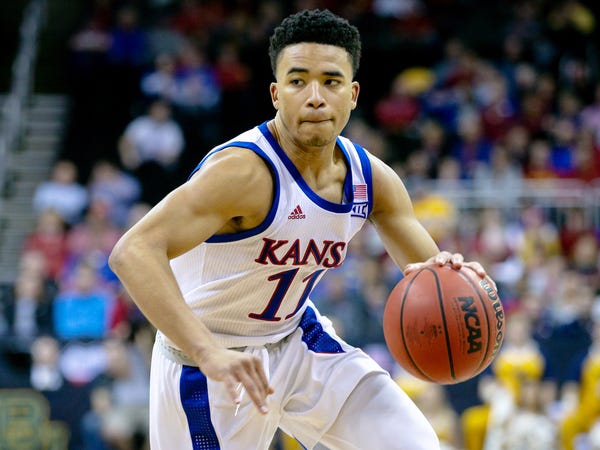 Voted to the All-Big 12 third team and the Big 12 All-Freshman team during his first year in Lawrence, Devon Dotson is prepared to be the floor general for one of the most stacked teams in college basketball. If Kansas’ off-court issues don’t become too much of a distraction, the No. 3 Jayhawks could return to their former glory and win the Big 12 regular-season title after breaking their streak of 14 consecutive years atop the conference last season. And if Dotson can keep his turnovers under control and stay efficient throughout, he’ll make his case as one of the top players in the nation. 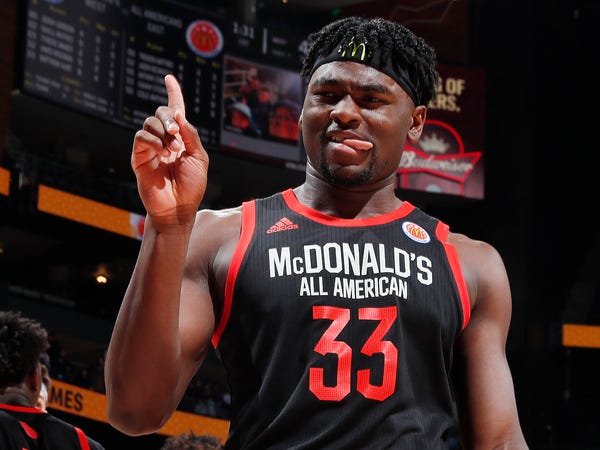 A 6-foot-9 center who knows how to control the block, Isaiah Stewart will be the Washington Huskies’ primary big man right out of high school. Though classmate and ESPN’s No. 7 player in the class of 2019 Jaden McDaniels figures to play a significant role in Washington’s bid to return to the Sweet 16 for the first time in a decade, Stewart is polished enough to be a legitimate All-America team contender. He will undoubtedly pace the young Huskies from down low. 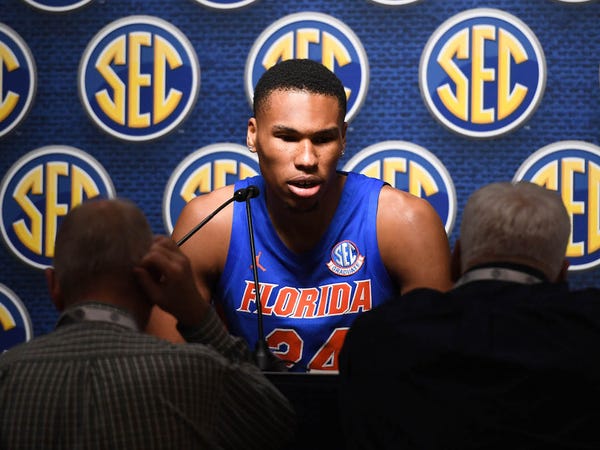 Kerry Blackshear Jr. was a force in his three seasons with the Virginia Tech Hokies, but now he’ll be the guy for the Florida Gators as the most highly-coveted graduate transfer in the country. A second-team All-ACC player last year, expect Blackshear to dominate the conference and help No. 6 Florida take down SEC heavyweight Kentucky during the regular season. 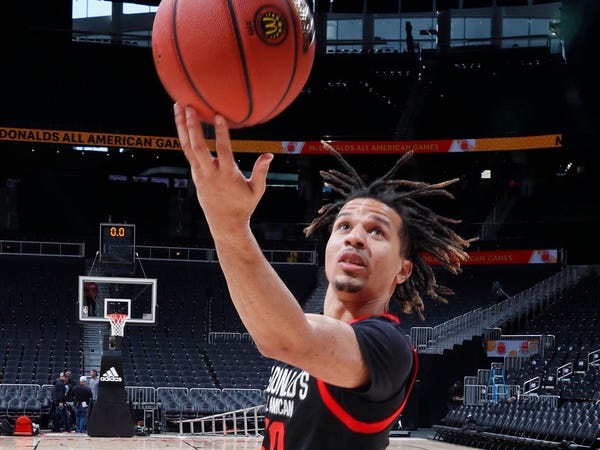 Cole Anthony has been a top-ranked player in the class of 2019 for a long time, but his near-triple double on the Prep Circuit this past season was enough to get the college basketball world buzzing about his All-America team potential. The 6-foot-3 point guard is primed to lead a young, top-10 North Carolina Tarheel squad through a challenging ACC schedule, packing the stat sheet along the way. 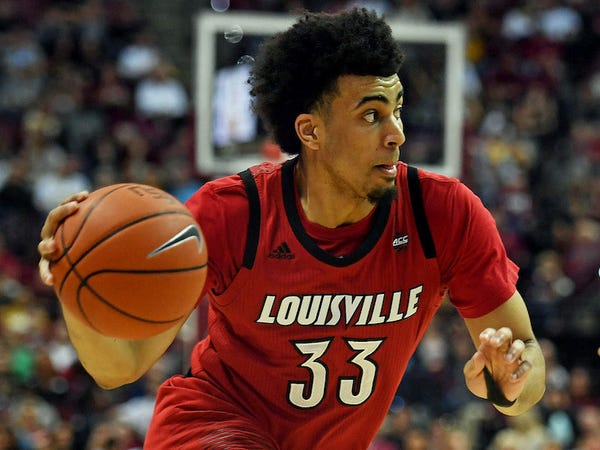 Not since before the Rick Pitino situation came to a head have the Louisville Cardinals had as much hype as they do heading into the 2019-20 season, and Jordan Nwora is undoubtedly their shining star. The 6-foot-7 forward was named the ACC’s most improved player and, despite blossoming into the sixth-leading scorer in the conference during his sophomore season, chose to return this year to lead a Louisville squad ranked fifth in the AP Top 25 Poll. 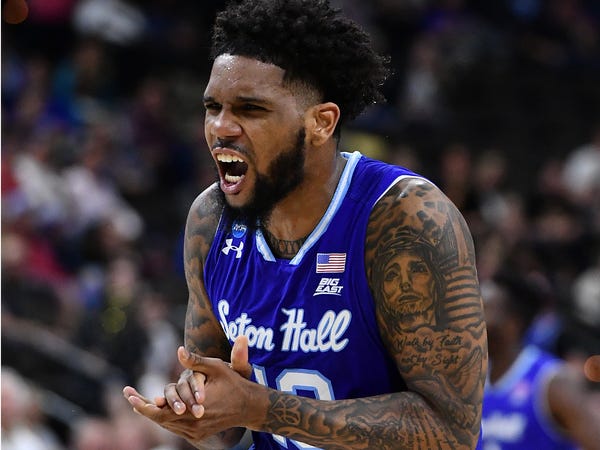 Seton Hall senior Myles Powell is one of the best scorers in the nation, and with almost every major player from last year’s Pirates squad returning to the team, No. 12 Seton Hall primed to make a bid for the Big East championship and best their first-round NCAA tournament exit from last season. Powell averaged a whopping 23.1 points per game on 44.7% shooting from the floor last year, and this season, expect to see the 6-foot-2 guard with the ball in his hands far more than ever before. 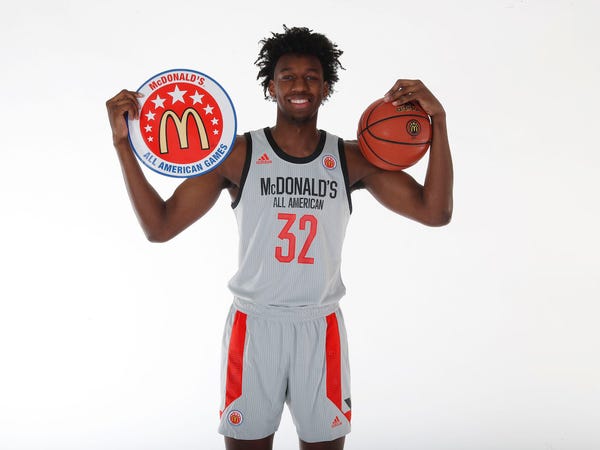 James Wiseman is the 2018-19 Gatorade player of the year and touted as the top recruit in this year’s incoming freshman class and is widely expected to be the No. 1 pick in the 2020 NBA Draft come June. He headlines an extremely impressive incoming class for second-year Memphis head coach Penny Hardaway, but as with any young team, growing pains will more than likely nag the Tigers. Various publications billed Wiseman a preseason All-America first-teamer, but we’ll have to see how he fares at the college level before fully buying in. 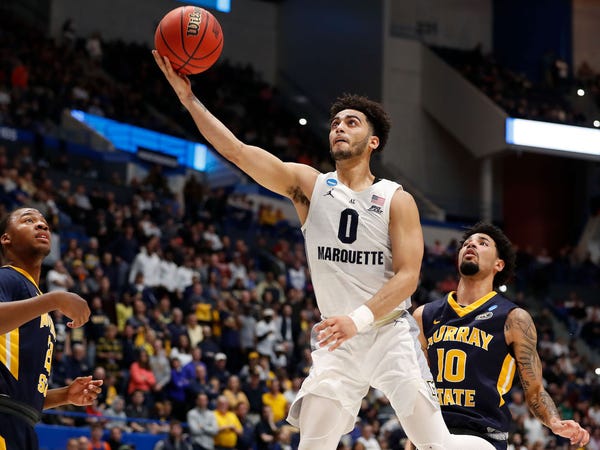 Though Markus Howard is a consensus pick for the preseason All-America first team, most have Michigan State’s Cassius Winston as a lock to win player of the year. No disrespect to Winston, who may be the most complete and polished player in the college game this season, but my gut tells me Howard will be this year’s “it” man, like Zion Williamson last year and Trae Young the year prior. The 5-foot-11 point guard has unmatched scoring potential, lighting up for three games with more than 45 points last season. And after choosing to reutrn for his senior year, Howard has the potential to improve upon an already impressive 25 points per game on 42% shooting from the floor and 40.3% shooting from beyond the arc.

Now check out what it was like to attend the National Women’s Soccer League’s record-breaking championship match: 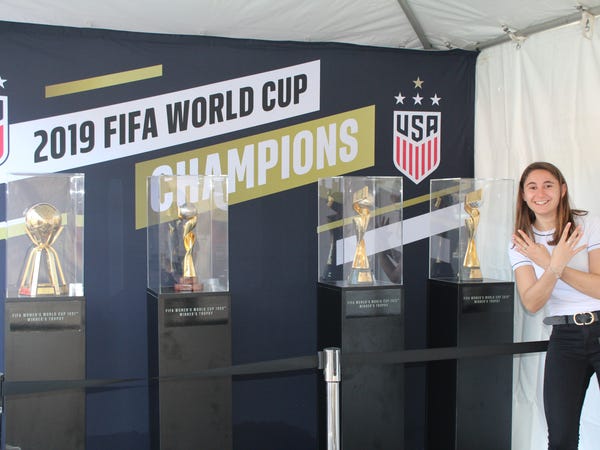 ]]>http://pagead2.googlesyndication.com/pagead/show_ads.js SEC has a good showing in the NCAA Tourney Posted By Kory Kinslow in SEC Basketball Mar 29, 2017 The SEC certainly showed up to play in the NCAA Tournament. Out of the 5 teams that got in, 4 teams won in the first round, with Vanderbilt being the only team to not win […]

“Let’s put it this way: Overall, the way this country is, it’s probably not in the best interest of everybody to have this in an ongoing epidemic,” Dr. Carlos del Rio, an infectious disease specialist who sits on the NCAA Covid-19 medical advisory group, said of the unusual start to theseason. Covid-19 already has disrupted […]

A Long Trip to the Brink of History for DavidsonBy JOE LAPOINTEPublished: March 30, 2008DETROIT — The players, coaches, cheerleaders and band members of Davidson are staying at a suburban hotel called the Dearborn Inn, built by Henry Ford, who also built behind it replicas of the historic homes of Patrick Henry, Walt Whitman and […]