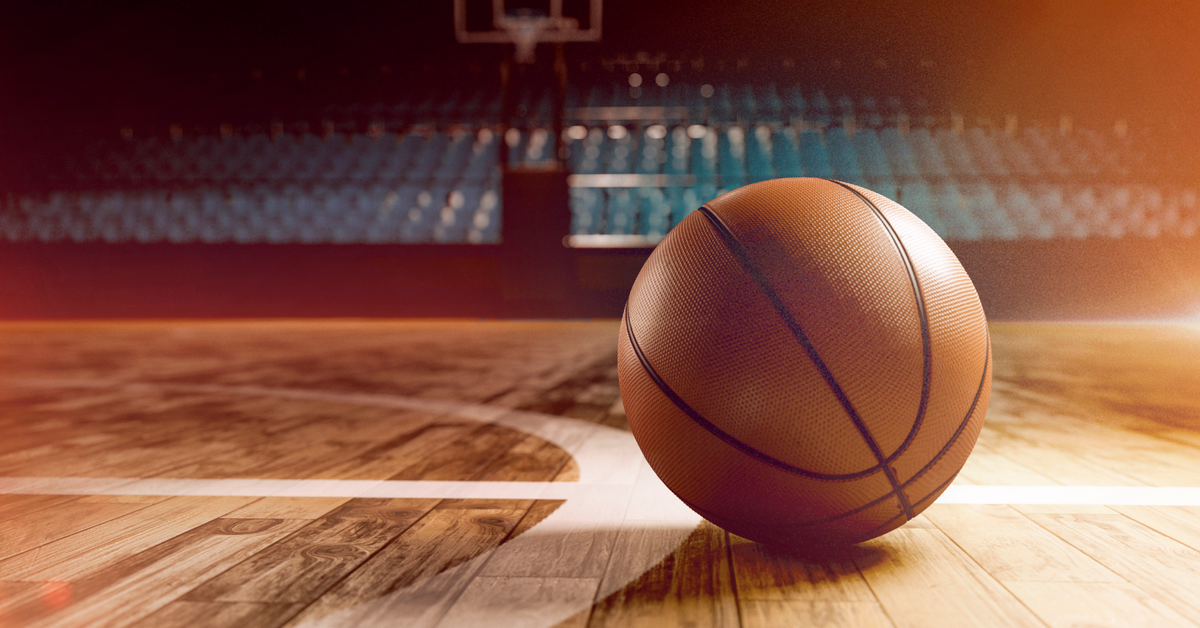 The madness came and went, with the Virginia Cavaliers topping the Texas Tech Red Raiders 85-77 in an overtime thriller for the school’s first ever national championship. Relive all the stories and results from the 2019 NCAA Men’s Division I Basketball Tournament.

• Here’s your complete guide to the Final Four

• The best fictional basketball players for any situation

• What a weekend! Full recap of the Sweet Sixteen and Elite Eight

• Here’s your guide to the Sweet Sixteen and Elite Eight

• Your guide to the NCAA Tournament opening weekend

• Get to know the 1-4 seeds, a.k.a. the probable national champions

• Noisemakers – 5 players to watch in the NCAA Tournament

• Final March Madness Bubble Watch: Who’s in and who’s out?

• The Rise of Mark Few And Gonzaga

The 2019 NCAA tournament has arrived. The best three weeks of the year got kicked off with Selection Sunday, culminating with the National Championship in Minneapolis, April 8 on CBS. Catch all the action between now and then on CBS, TBS, TNT, TruTV and the all-encompassing NCAA March Madness Live app on iOS and Android.

Click here or on the bracket to print the full page version of the official 2019 NCAA Tournament Bracket. 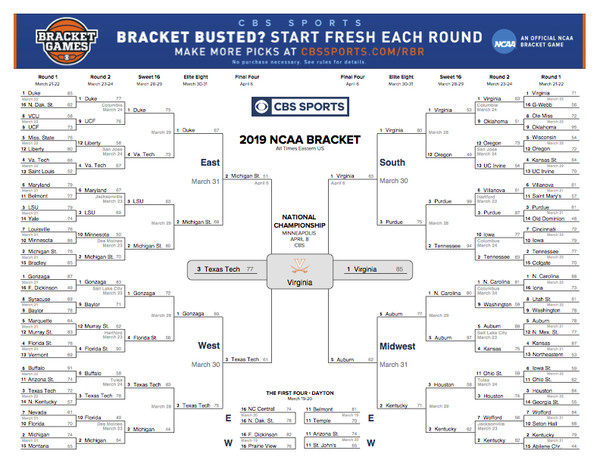 The 2019 conference tournaments were as unpredictable and exciting as ever. Here are the 32 teams that earned themselves an automatic NCAA Tournament bid.

March Madness starts with the First Four games on March 19-20 and ends with the National Championship on April 8. You can find the full schedule here.

When is 2019 Selection Sunday?

On Sunday, March 17, the full March Madness bracket is released to the public on the CBS Selection Show at 6pm.

When is the 2019 March Madness bracket released?

The 2019 bracket is revealed on the CBS Selection Show at 6pm, Sunday, March 17.

How do I watch 2019 March Madness games?

All 2019 March Madness games will air on either CBS, TBS, TNT or TruTV. You can also stream games via the NCAA March Madness Live app on iOS and Android. The full schedule is here.

When is each round for the 2019 NCAA Men’s Division I Basketball Tournament?

The 2019 Final Four is Saturday, April 6 and the national championship is Monday, April 8.

What is Selection Sunday?

Selection Sunday consists of the NCAA Division I Men’s Basketball selection committee determining the 68 team NCAA Tournament field, choosing 36 teams in addition to the 32 conference tournament winners, and ranking all 68 teams in four separate regions from 1-16.

How many teams get into the NCAA Men’s Division I Basketball Tournament?

The March Madness field is made up of 68 teams – 32 conference tournament winners and 36 at-large bids.

What is the lowest seed to win March Madness?

The lowest seeded team to win it all was the 1985 Villanova University team as a No. 8 seed.

What is the lowest seed to win a March Madness game?

In 2018, No. 16 seed UMBC became the lowest seeded team to win a NCAA Tournament game when they upset No. 1 seed Virginia.

What NCAA Men’s Division I school has won the most national championships?

UCLA has won the most national championships, with 11 titles. Next on the list is Kentucky with 8, North Carolina with 6 and both Duke and Indiana with 5.

The content featured on https://entertainment.directv.com/ is editorial content brought to you by AT&T. While some of the programming discussed may now or in the future be available by our or our affiliates distribution services, the companies and persons discussed and depicted, and the authors and publishers of licensed content, are not necessarily associated with and do not necessarily endorse AT&T. When you click on ads on this site you may be taken to AT&T marketing pages that display advertising content. Content sponsored or co-created by programmers is identified as “Sponsored Content” or “Promoted Content.”

Mitchell Layton/Getty ImagesThe NCAA canceled all winter and spring sports championships Thursday, including the men’s and women’s basketball tournaments, to prevent the continued spread of the coronavirus. Not surprisingly, players across the country met the move with a mix of emotions.  Duke guard Tre Jones and Kansas forward Mitch Lightfoot were at a loss for words: Jones’ […]

Don’t miss some of college basketball’s brightest stars in action in Columbus this spring when the 2015 NCAA Tournament takes over Nationwide Arena on March 20 and 22. The facility will be reprising its role as host during March Madness for a fourth time overall and first time since 2012. As the home venue for […]