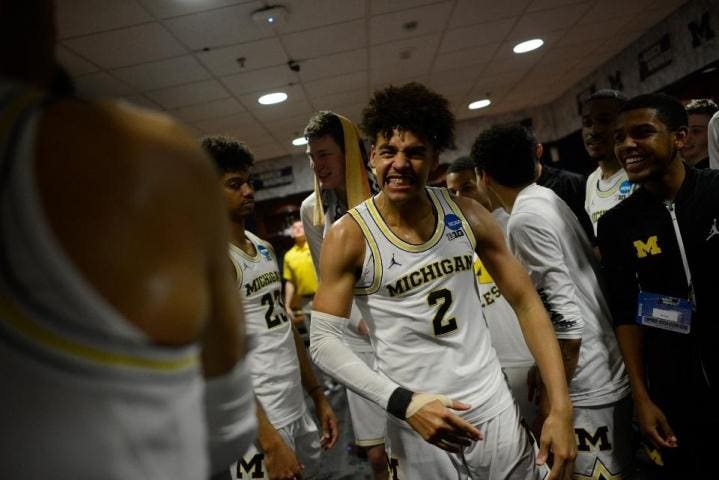 The NCAA Men’s Basketball Tournament is one of the most popular televised sporting events in the… [+] United States. (Photo by Evert Nelson/NCAA Photos via Getty Images)

The revenue derived from hosting the NCAA Men’s Basketball Tournament goes to many places. Among them, NCAA member colleges use some of the revenue to pay coaches’ salaries. For example, Duke University pays head basketball coach Mike Krzyzewski an annual salary of $8.9 million. Meanwhile, the University of Kentucky pays head basketball coach John Calipari a salary of just under $8 million.

In addition, colleges allocate some of the NCAA Men’s Basketball Tournament revenue to paying executives. At present, the member colleges pay NCAA president Mark Emmert an annual salary of nearly $2 million per year. Meanwhile, some of the power conference commissioners earn salaries closer to the $3 million range.

The NCAA’s internal rules, however, continue to prevent member schools from using any tournament revenue to pay their athletes. Instead, based on the longstanding NCAA “principle of amateurism,” the college athletes remain just about the only individuals not to bring home a big paycheck from March Madness.

Given the outdated nature of this system, which keeps a workforce of primarily low-income African-American college athletes from sharing in the fruits of their labor, perhaps it is time for the players in the NCAA Men’s Basketball Tournament to seriously think about forming a union.

From a financial perspective, the unionizing of elite Division I college basketball schools could lead to a much-needed reallocation of some of the NCAA Men’s Basketball Tournament’s revenue away from coaches and administrators, and to the players.

The unionized athletes in the four premier U.S. sports leagues earn approximately 40-50% of all sport-related revenue. If one were to apply this same revenue percentage to NCAA Men’s Basketball Tournament players, it would create a pool of $400 to $500 million to allocate among the players.

Of course, obtaining the right to collectively bargain against a member college or collection of colleges over the mandatory terms and conditions of employment could get quite political. A few years back, when Northwestern University’s grant-in-aid college football players attempted to form a union, the National Labor Relations Board used its discretion to decline jurisdiction, even though an NLRB regional board recognized that these football players met the federal law definition of employees.

In any event, however, something just seems wrong with allowing the NCAA to pull college athletes out of class to play in a billion-dollar basketball tournament without sharing some of the revenues derived from the tournament featuring these athletes. Tangible change to the college basketball system is long overdue, irrespective of whether that change comes from a players’ union or a different, similar means of reform.  If properly advised, college basketball players will not wait too much longer before legally pressuring for meaningful change.

Marc Edelman (Marc@MarcEdelman.com) is a Professor of Law at Baruch College’s Zicklin School of Business and the founder of Edelman Law. He is the author of “A Short Treatise on Amateurism and Antitrust Law.” His article, “The Future of College Athlete Players Unions,” appeared in Volume 38 of Cardozo Law Review.

Basic Account Get to know the platform Single Account Your perfect start with Statista $59 / Month * Corporate Account Full access All products require an annual contract; Prices do not include sales tax. Statistics on “Basketball” Further related statistics Further Content: You might find this interesting as well Statistics Learn more about how Statista can support […]

Unsealed criminal complaints accused the defendants of wide-ranging bribery schemes in which coaches used their outsized influence to sway young athletes’ business decisions. Prosecutors claimed the coaches abused their positions of trust for their own gain. All of the allegations involve sports agent Christopher Dawkins and his associates, who paid out thousands of dollars to […]