SEC has a good showing in the NCAA Tourney

The SEC certainly showed up to play in the NCAA Tournament. Out of the 5 teams that got in, 4 teams won in the first round, with Vanderbilt being the only team to not win a game. Arkansas was the next to go down…

2017 SEC in March Madness Preview: The SEC Looks to Establish Itself as a Power 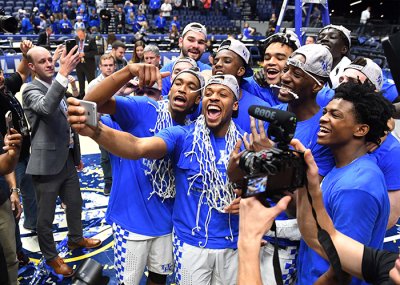 At this point in the season the SEC has 3 good teams at the top and 9 teams kind of bunched up after that with two teams bringing up the rear. Kentucky, South Carolina…

We have only three teams in the NCAA Tournament this year. I guess I can understand that, as the league may have been not as Nationally recognized this year, but I think there was at least one other team that deserved to be in.

The SEC was a lot deeper than most thought they would be. With 8 teams playing in the post season, 5 in the NCAA tournament and 3 in the NIT, the teams truly showed that the SEC is back on the map as a power in college basketball. The NIT features Vanderbilt, Texas A&M, and Alabama. The NCAA tournament will feature Kentucky, Arkansas, LSU, Georgia, and Ole Miss. It was certainly a good season for the SEC.

The SEC has proven to be more powerful than the analysts thought at the beginning of the season. It appears, by all accounts, that the SEC should produce 5-6 NCAA tournament teams. The SEC tournament should be very exciting. Teams will be trying to prove that they should be in the NCAA. I believe that we will see a couple of upsets, but there is one constant that has been proven throughout the season and that is that Kentucky is the best team in the country.

As we stand just a few days away from conference play the SEC basketball landscape is pretty confusing and murky with one exception that we all know, which is Kentucky. Kentucky is obviously the best team in the conference as well as the country. I do not think they will lose a conference game. The toughest team they had to play this season before the tournament was Louisville and they have defeated them. After Kentucky everything is confusing. I think Florida will finish second as they are finally getting their whole team together.

SEC Falls to Uconn Twice in Tournament, but Proves the Conference Stronger than Thought

The Uconn Huskies won the NCAA Championship of Men’s Basketball tonight by defeating the Kentucky Wildcats by a narrow margin. Uconn came out of the gates strong and while Kentucky made run after run, the Huskies proved to be more experienced and mentally tougher. The game really came down to the inability of Kentucky to make free-throws. It could have simply been nerves. Randle did not play his best game, but I felt that Young showed that he too, will be a major factor in the NBA in the future and I’m sure in the draft this summer.

The season has come down to it’s final four, and to the shock of many, the SEC has two teams left standing. This tournament did not go the way most picked, but Kentucky may just be the shock of the tournament. Florida was the number one overall seed and most prognosticators had picked them to get the the round of four. Kentucky was given an eight seed and had to beat undefeated Wichita State and Louisville, before defeating Big Ten Power and number 2 seed Michigan to get to the semi-final round.

The first night of the Sweet 16 saw the SEC team that actually got respect, with Florida playing 4 seed UCLA. UCLA kept it close for a while, but Florida ended up dominating the second half with a 79-68 win for the Gators. The SEC Player of the Year and SEC Tournament MVP Scotty Wilbekin took over in the second half after a sub-par first half. He showed the toughness that has propelled this Florida team all year round and won them the overall number 1 seed in this tournament.

While the SEC is known primarily as a football conference (they have won the last six national championships), the conference is also a perennial basketball power. Kentucky is back on top. Florida is just a few years removed from back-to-back national titles, and John Calipari has returned Kentucky to prominence once again. Arkansas also looks to be on its way back, which can only help the SEC on a national front.

The strength of the basketball programs in the SEC once again lie in the East, with Kentucky, Florida, Tennessee, Georgia, and Vanderbilt all looking primed to compete for the SEC Championship this season. The East should be a hard fought division, and I highly doubt any team from the East will be able to get through the division with only one or two losses.

Florida looks to be the class of the SEC this season; there is hope in Gainesville that the Gators will return to the Final Four after three years away. They return all five of their starters, and they have a tremendous freshman class that looks to make a large splash early on.

The SEC West looks to be wide open this season, with Mississippi State being the only team that is really set, and even the Bulldogs have questions that need to be addresses before the season really gets underway. Ole Miss may challenge for the crown, but they have more question marks than Mississippi State does at this point. Arkansas still looks to be a year away from seriously contending for the SEC crown, and Alabama is looking to finish in about the middle of the pack once again.

There is not that much separation between the top conferences this coming season, with nearly every conference having a team that has Final Four talent and dreams. Here is how our rankings of the conferences stack up for the beginning of this season:

New this season — all SEC basketball teams ranked together, 1-12; not separated by East/West Divisions. The idea is to fix the unbalanced division situation we had last year when Miss. State went 9-7 in the SEC and still got a first round bye (and #2 seeding) in the SEC B-ball tournament ahead of teams in the East with a better record.

1. Florida Gators – Made it to the “Great 8” in the NCAA Tourny. For this year, they have lost last year’s SEC Player of the Year — Chandler Parsons; but remain loaded, especially at guard (Erving Walker). Look for another trip to the NCAA Tournament and if they can develop some of their big, inside players — they could make a run.

2. Kentucky Wildcats – The cream of the crop. Not just in the SEC, but nationally. UK is loaded as has become usual in the Calipari era. Terrence Jones should be player of the year in the SEC and Anthony Davis — freshman of the year. All in all, 4 players will be first or second team All-SEC. Look for the Cats to win the SEC handily and challenge for the national title.

3. Vanderbilt Commodores – This may be the year for the Dores. All 5 starters from last year are back. John Jenkins should be 1st team all – SEC and Jeffery Taylor — second team all-SEC. Vanderbilt is always disciplined and well coached. If they can toughen up their defense, especially in March and April — look out!

4. Missouri Tigers – The Missouri Tigers have a 2 game winning streak and now have the second best over-all record in the SEC and are fourth according to overall standings with a 4-3 SEC record and 16-4 over all record.  This is a team that we all thought would be tournament bound in non-conference play, but a sub par performance early on in SEC play did not look like it would end soon.

5. Alabama Crimson Tide – We’re picking Alabama to come in 5th in the SEC. Last season the Crimson Tide showed improvement; this year we expect to see them in March Madness. JaMychal Green will be an All-SEC player and lead the way.

6. Mississippi State Bulldogs – MSU was a big disappointment last year. But, the talent is still there and we think they put it together well enough to get an NCAA bid. Dee Bost should be a second team all-SEC player.

7. Arkansas Razorbacks – UA has a new coach in Mike Anderson. Look for them to be decent; middle of the pack; probably get an NIT bid at the end of the season.

8. Georgia Bulldogs – Trey Thompkins and Travis Leslie, the two leading scorers from last year’s team are gone. There are some talented new players but, it will be a rebuilding year.

9. Ole Miss Rebels – The Rebs lost two of their top scorers from last year’s team but picked up Jalen Kendrick. Ole Miss will be competitive but not so much at the top of the league.

10. LSU Tigers – LSU will be better this year. Of course last year they were the worst team in the SEC. This year, they maybe move up to #9 or so.

11. Tennessee Volunteers – Crazy year last year. In December the Vols looked like one of the best teams in the country. By the end of the year their coach was fired and they had lost to Michigan by 30 points in the first round of the NCAA tourney. New coach Cuonzo Martin will have to rebuild. Sort of sounds like the Vols’ football program….

12. Auburn Tigers – Suffered through a tough year in Tony Barbee’s first season as coach last season. Unfortunately, we expect another rough year. But, things should improve when Noel Johnson becomes eligible in December.

13. South Carolina Gamecocks – Things have been bad in Columbia for a while and will get even worse this year. Look for Darren Horn to send out his resume soon.

What do you think?

We’d love to hear your comments and/or opinions. If you submit them here, other visitors can read them, rate them and comment on them. An e-mail address is not required.

To receive credit as the author, enter your information below.

Check box to agree to these  submission guidelines.

(You can preview and edit on the next page)

What Other Visitors Have Said

Click below to see contributions from other visitors to this page…

The MVP Race Not rated yet
The 2016-2017 NBA season is two man race for the MVP. Russell Westbrook from the Oklahoma City Thunder has been nothing less than spectacular. He has …

Published March 12th Another major spring event has been canceled due to coronavirus. The 2020 NCAA men’s and women’s championship tournaments have been called off, the organization announced on social media, and the events will not be rescheduled. That means the college basketball season has come to an abrupt end, without the traditional “March Madness” […]

Of all the matchups that cause the most anxiety for the lower-seeded teams, the dreaded 5-12 game has the most potential for an upset in the 2021 NCAA bracket. Since the NCAA Tournament bracket expanded in 1985, there have been 50 upsets by No. 12 seeds over No. 5 seeds, meaning the lower seed is […]